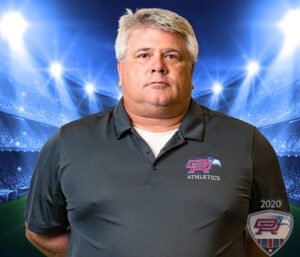 Coach Smith will be entering into his 27th year of coaching and holds a United States Soccer Federation “B” license. Originally from Pascagoula High School (MS) where he played football, soccer, and ran track. He played club soccer for Singing River Soccer Club and was on the Mississippi ODP team for 2 years. He attended the University of Southern Mississippi, playing soccer while completing his degree in Coaching and Sports Administration/History. He coached 7 years in Mississippi as the Head Soccer Coach at Resurrection Catholic School, first assistant at Pascagoula HS, and Head Boys Soccer Coach at Gautier HS where he won district and was named district coach of the year. In 2000 he moved to The Woodlands to coach at Branch Crossing JH/McCullough JH and The Woodlands High School for 8 years as the first assistant soccer and assistant football coach. During those 8 years the Woodlands HS made state playoffs, won 3 district championships, and made the regional semi-finals 3 years. He has coached at
Magnolia West HS, Stephenville HS, Conroe HS, Kempner HS, Pascagoula HS (MS) and Vancleave HS (MS). As the Head boys soccer at Stephenville HS his team placed 2nd in district and made the regional quarter-finals. As the first Assistant soccer coach at Conroe HS he helped those teams make the state playoffs and the regional finals in 2014. Coach Smith has 2 children, both CISD graduates. Son Derek (31) is an engineer living in Houston, Daughter Dr. Amber Gregory (31) is a chiropractor and lives in Klein.

Coach Smith will assist with football and boys’ soccer at ORHS.

There are no upcoming events at this time.

Make sure this account has posts available on instagram.com.